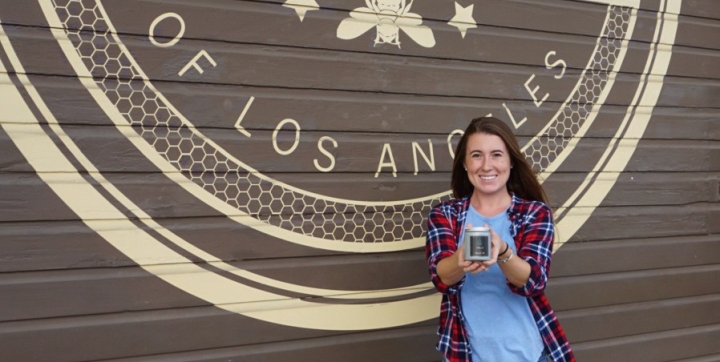 This past weekend I drove down to San Pedro for a Verlocal Experience with Banter & Bliss Candle Co.

Banter & Bliss is located in the year round market place called Crafted at the Port of Los Angeles.

Sheena greeted us with a friendly smile and told us to take off any nice jackets or purses we had and place them to the side, as the oils and wax can get a bit messy.

You start by picking out what scent or scents (you can mix a few) you want your candle to smell like. Ranging from traditional scents of vanilla and fresh cut grass, to fun ones like sparkling mojito and champagne kisses (smells like mimosas!), all the way to seasonal scents such as Fraser fir, cranberry marmalade and mistletoe. I chose to mix vanilla and Fraser fir.

There were 7 other people in the group with me. Two of whom were a young couple there to learn how to make candles and decide on scents so that they could make their own as upcoming wedding favors. She chose to mix a lilac and hyacinth combination that smelled like sweet summertime. Another two was a set of girlfriends just looking for something fun to do on the weekend, one chose a rose scent that smelled heavenly. There were also two women there with their mother who chose to make a candle that smelled like cranberry marmalade. Perfect for Thanksgiving coming up. Its such a fun activity to do whether you’re alone or in a group and I can see doing this with friends often as everyone gets to go home happily with whatever scent they choose.

You start by tacking the wick to the bottom of the glass jar. Sheena took this time to explain to us all about the differences in wicks and why certain ones should be used over others and how to know if you should be using a thicker or thinner wick.

Then we took the time to measure out 8 ounces of the scented oils. Up to 10 ounces is ideal for the candle but initially measuring to 8 ounces gives you wiggle room to adjust however you see fit. This was the fun part – getting to decide if you wanted your combination to smell more like one of the multiple scents or if you wanted it to just have a hint of a scent. To do this, you divide the 8 ounces into whatever ratio you think you’ll like. I wanted there to be a hint of vanilla but mainly Fraser fir (like when you walk into a home at Christmas time and can smell the tree but a hint of fresh baked cookies in the background too) so I put 5 ounces of Fraser fir with 3 ounces of vanilla. After stirring it the vanilla was stronger than I had anticipated so I added another 2 ounces of the Fraser fir. So perfect!

Sheena comes over to pour your wax for you. Then you can choose whatever color you want your candle to be and stir that and your oil mix into the wax. There are so many options for colors such as teal, pink, orange, red, green, light blue, dark blue, purple and grey. I went with grey – which initially looked black when she dripped it in. The colors definitely lighten up as the wax cools down which was also cool to see because it was kind of a surprise as to what exactly they would look like when they’ve cooled. 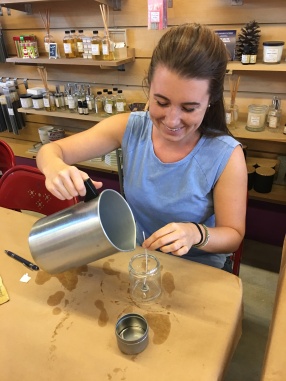 Once we had stirred the color and oil into the wax we slowly poured them into the glass jars. Sheena had a cool little trick of threading the wick through a clothes pin to hold it straight up while the wax cooled around it.

The candle takes about an hour to cool and be ready to take home. This is so nice because there is so much to do at Crafted at the Port of Los Angeles and this wait gives you the time to do it. I grabbed a nice, warm coffee from a nearby booth, Drunken Cake Pops and browsed the booths. There are so many different things to look at and other fun crafts booths to stop at and check out. After browsing a bit I went back to Banter & Bliss’ booth and made a label for my candle. It wasn’t cooled yet so I went out had a delicious chicken sandwich from the food booth where people were picnicking and kids were playing soccer. There is also a craft brewery out there! What a cool place to spend a Sunday. 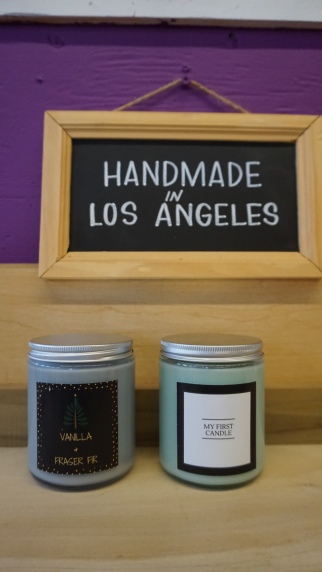 It was such a pleasant way to spend a Sunday and I got to take home my own candle. Overall, I spent about 3 hours attending the class and dilly dallying around. I would highly recommend attending a Verlocal Class at Banter & Bliss!

Thank you Sheena and Banter & Bliss! Thank you Verlocal for letting me know about this class! Hope everyone reading this can go check it out soon too and take home your own treasure 🙂